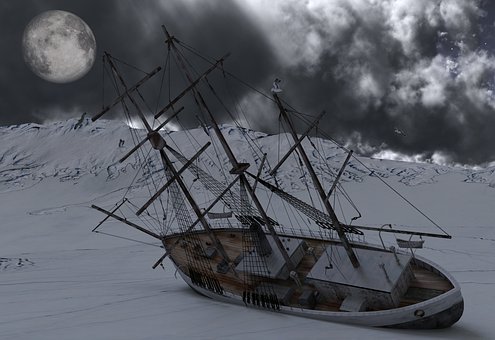 I just finished watching AMC’s ten-episode series The Terror, thanks to the kind invitation of a friend who had already watched it and was eager for fellow viewers. (Btw, the memes this show has generated are amazing. Watch the show. Then appreciate the memes.) The television series is based off of the novel by Dan Simmons which, in turn, is based off a nineteenth-century historical expedition to discover the Northwest Passage.

The novel and TV series introduce supernatural elements into an already-terrifying landscape and situation (imagine poisoned food, stranded ships, and dead bodies, and you’re only partially on your way to understanding the reality of the situation). However, the real horror of the show lies not in the terror that stalks these trapped British explorers–but in the souls of the sailors themselves. It is a show expansive and claustrophobic in turn, full of brilliant and disturbing images. The intensity of the show builds as one episode bleeds into the next until you are begging for a cathartic release, much like the men themselves.

Part of the horror of humanity that this show explores is the danger and trauma of expedition fueled by Western colonialism, as the sailors endanger not only their own lives but those of the native Inuits. The show is not perfect in its representation of these marginalized voices (as it does not avoid the stereotype of indigenous peoples as mystic), but it heads in the right direction by casting Inuit actors to represent the Arctic inhabitants who encounter and interact with the white explorers.

The show is worth a watch, if you enjoy the interplay of supernatural and all-too-natural horror.